According to Hibiscus Moon Crystal Academy, “Garnet is THE gem stone to have in your sacred space for Winter Solstice.”

Apart from a pair of garnet stud earrings, I didn’t have garnet in my collection of about two dozen crystals and tumbled stones. So I decided to visit a nearby metaphysical shop on December 21. 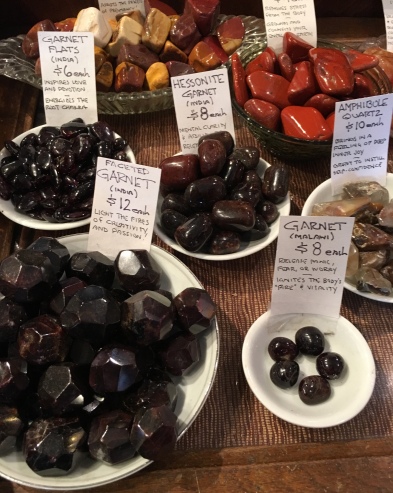 The cashier at The Raven’s Wing Magical Company wished me a happy solstice as I completed my transaction: I purchased 2 kinds of tumbled garnet and one tumbled piece of selenite (see below). 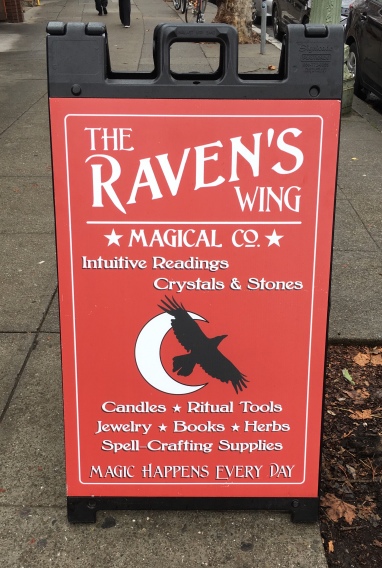 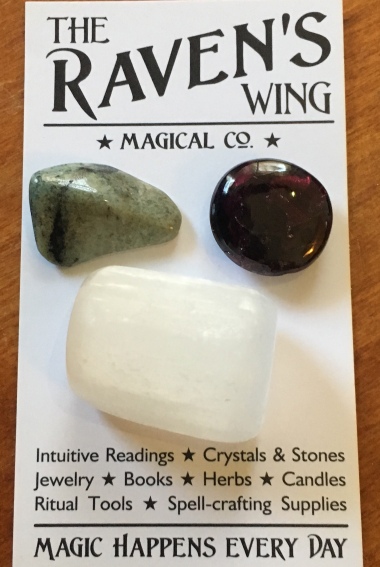 I was introduced to crystals many years ago when I first picked up a rose quartz from a sidewalk vendor on Market Street in San Francisco. It caught my eye simply because it looked pretty.

In the beginning, I was skeptical. I thought that any healing power would only be the placebo effect. Raised in the Catholic faith, I grew up thinking that crystals were taboo as they were associated with terms, such as witchcraft, magick (with a -ck!), superstition, talisman, occult powers, and good luck charms.

But as the saying goes: “Don’t knock it ’til you try it!”

So a few years ago, I started to explore the healing qualities of crystals and gemstones. (I also made wire-wrapped rings with tumbled stones.)

I haven’t yet tried to cure minor aches and pains with them, but at the very least, I do believe they help me keep sight of my goals and stay focused. For example:

Now that I’ve learned that garnet is also good for the winter solstice, I say, bring on the light and positive energy into the new year! 💎

To learn more about crystals and gemstones, I enjoy reading these online sources:

I’ve purchased crystals and tumbled stones from the following vendors:

The Mystic Merchant in Solvang, California

Do you believe in the healing powers of crystals and gemstones? Let me know in the comments below.

I'd love to hear from you: Cancel reply

This site uses Akismet to reduce spam. Learn how your comment data is processed.

thanks for stopping by